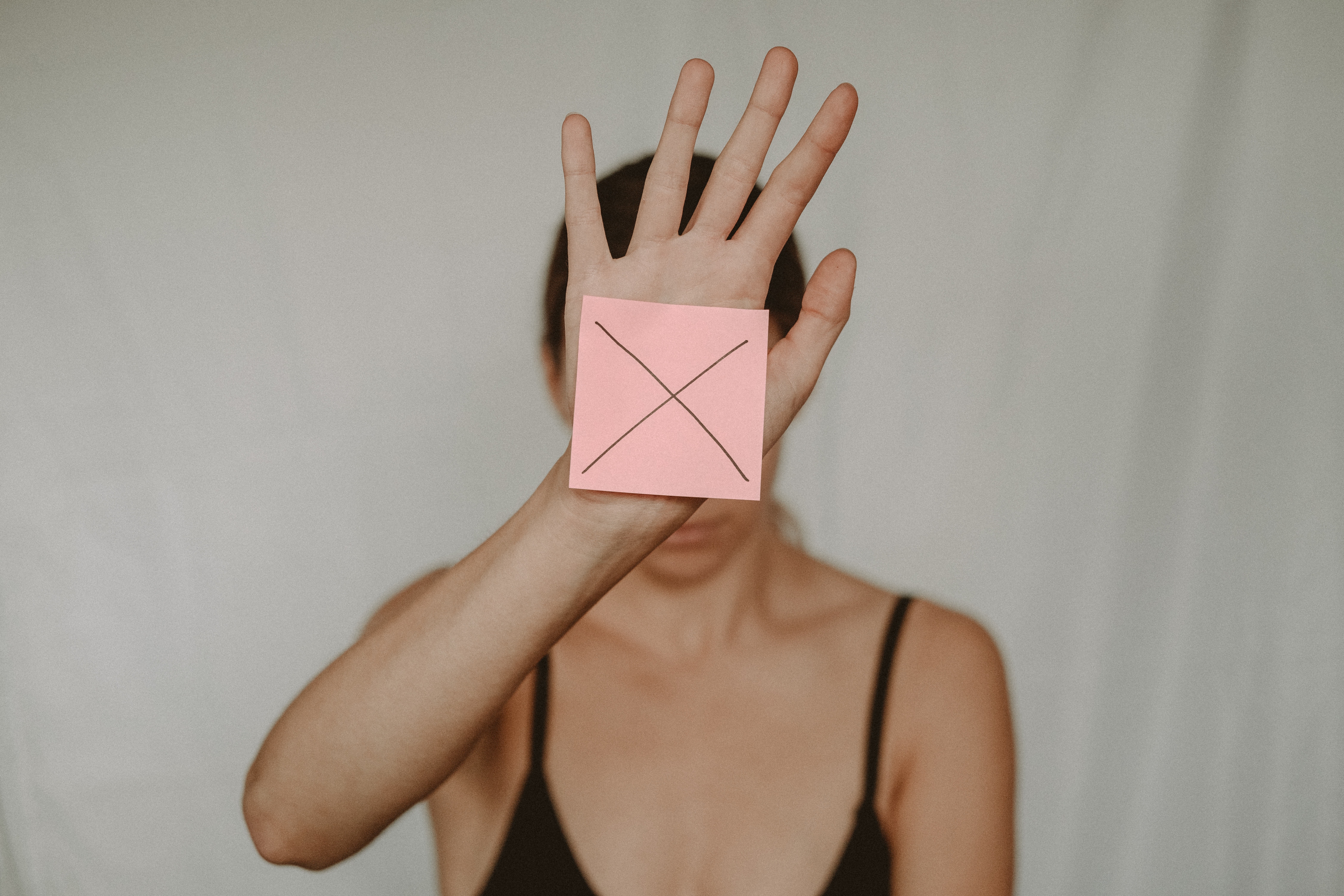 Here's how to reclaim your power.

In my early twenties, as a rising star in the financial services, I had the world at my feet.

I had worked tremendously hard to get there.

Despite the challenges I faced and the barriers I had to break through, I mostly loved my job and was looking forward to a long career ahead of me.

One day, however, something happened that really knocked me for six.

After a business lunch, a client - with a few too many drinks under his belt - walked over like he was being dared and instead of greeting me, he licked my face.

My stomach absolutely churned. I thought I was going to be sick. Every part of my body coiled inward and I wanted to scream.

But at the same time, I froze, like a deer in headlights, unable to speak.

After a moment, I grabbed my bag and made a swift exit.

If I’m honest, I was horrified as to how this could have happened to me and why, being such a strong, passionate believer in gender equality and having a voice, didn’t I, or rather, couldn’t I - say anything?

I’ve experienced a lot of sexism in my lifetime but this, this really takes the cake.

But when I went back to the office and talked to my leader about it, the injustice continued. Just this time, in a more subtle fashion. I was told “not to worry”, that “we’ll look after you” and that “I’d never have to deal with him again”. Indeed I didn’t. But that was because the man and his account were taken out of my scope of clients.

Ultimately, I lost a large chunk of business all because he chose to assault me. I was the one who came out of it with a loss, not him.

The reality is, no-one should be put in a position like this.

I don’t want you to go through what I went through.

Sexism is everywhere - whether it’s in-your-face or more subtle, and it’s very common to find yourself so totally paralysed to respond.

The anger, shame and panic all hit you at the same time, as you struggle to know what to say. It’s a very human, very normal response, but in order to progress, we need to find the strength to speak up and call it out, even if it’s after the event takes place and we’ve been able to gather our thoughts.

You see, often we freeze right there and then in the moment as a response to potential danger (it’s called the ‘freeze response’ - think of it as the third response to ‘fight or flight’).

This normally happens as a self-protective stress response - one which we adopt to try and make sure that the situation doesn’t escalate. So you don’t blame yourself for not reacting how you wish you had in the past.

However, if you do want to perhaps be a little less caught off-guard by quips and comments in  future - and have some responses up your sleeve to empower yourself in case you do want to talk back in the moment -  then all the power to you.

I want to preface what I’m about to recommend by saying this to you:

It is categorically never a woman’s responsibility to react - and respond in the ‘perfect’ way so that the person will stop.

The onus is fully on the perpetrator to refrain from going there in the first place; not for the victim to get them to stop.

But unfortunately, believing this deep down doesn’t happen overnight, especially when we’re conditioned by society to feel responsible for the way men treat us.

So while we work on trying to internalise this belief, I’ve got some linguistic tools to help you regain your power in the moment, should you need them.

Here are some tips I can share for how to respond to:

- When you get catcalled in the street

I wish I couldn’t believe the stats, but then I can - as all the women I know and I have experienced it.

In Australia, 90% of women have previously experienced cat-calling or sexually aggressive comments according to a recent report - and with this, it’s never been clearer that few of us have escaped the sad reality of harrassment due to our sex.

While there is no easy response to this, there are a few things you can do, depending on how comfortable you feel.

You can document it. Take a picture if you feel comfortable. Break out of the feeling of powerlessness by taking action - and if there are visible signs of their company around, use these to potentially report them to their employer (or at least they’ll know this is a possibility).

Or you can ignore them deliberately - which is a sign of strength and not weakness, because attention is exactly what catcallers want from you - and you are refusing to give it to them.

Alternatively, you could flip them the bird - it seems to give me some kind of quick high anyway.

- When your friend makes a sexist joke

Your friend makes a casual quip, with the punchline having something to do with women being “whatever the new female insult /casual sexist joke of the day is.” Yes, we’ve all been there.

Normally in these situations, you might feel conditioned to laugh along (albeit nervously), even if you don’t agree, because it’s too awkward to outwardly express disagreement - especially in the moment - and you just want it to be over.

The other part of you has been cultured and socialised to be a ‘good sport’ about these things. I call this the ‘brush it under the rug approach’ and it’s one that I’ve decided to remove from my repertoire. It does absolutely nothing for us and only allows the behaviour to continue.

There are two tactics that you can swap in here that I find effective:

Refuse to validate the joke with a laugh - even sit in silence if needed before changing the subject, taking away that person’s ‘air-time’.

“What do you mean by that?”

Compelling them to explain their behaviour can often reflect how ridiculous the logic in their comments is.

I love nicknames and terms of endearment - particularly with my loved ones (I call my husband all three of these things, after all!), but when used with inappropriate relationships, and ones where there is a power imbalance, the terms only serve to belittle women into staying in the lane of their ‘sweet, kind, endearing, girlish womanhood’.

Pay attention to whenever this is done, even when you’re referred to as a ‘girl’ in the office - again the use of it is either consciously or unconsciously used to minimise your stance and it IS condescending. Listen to the clues and then pay attention to the impact it has on your presence in the eyes of those around you. Awareness is key, and it will help you to put a stop to it.

Whenever I experience this myself, I simply inject with the word ‘woman’. So if someone says “Shivani is a great girl”, I simply respond; “woman”, or “woman, and thank you” if I want to take the heat off a little. But they both work a treat.

I do this for the other women I work with too. While I find the term ‘ladies’ to be perfectly fine (though, only you can decide which terms work for you or don’t), if I hear the term ‘girls’, ‘sweetie’ or anything else, I’ll repeat the point made by the person and correct them by adding the woman’s name, or I’ll refer to her as a ‘woman’, while making eye contact with the now fully self-aware (and sometimes mortified!) perpetrator.

Suffice to say, I have seldom seen them do it again.

Another way to respond is to simply, in a calm tone, say that you prefer being called by your name.

Often this is unlikely to make the situation escalate when said casually, but if they do persist, then you might want to reinstate boundaries and expectations (you know the simple stuff like having the equal respect of being referred to by your name and all that!)

Just remember that you can only control yourself - and not the other person, so if you have to walk away after that, then you know you absolutely can.

- When someone makes negative or unsolicited comments about your body

Okay, so we know that as women, we’re bombarded everyday by advertising and social media posts telling us that our bodies just aren’t ‘good enough’.

We’re not ‘good enough’ if we’re not toned and slim with a 6- to 8-pack, lathered in some kind of body oil that looks like we’ve been on an eternal beach holiday that has a gym, beauty salon and hairdresser at our constant disposal. Know what I’m talking about?

Well, we don’t need jibes from people we know on top of that saying the same thing!

If someone makes a negative remark about your body, even if it’s veiled as a joke, pull them aside and tell them that you find it hurtful. Also, if someone comments on your body in a way they think is positive but makes you feel uncomfortable, call it out.

Some people, when confronted with their actions, will realise the impact of their words when they see the effect it has on you and will change their behaviour.

Also, even if it doesn’t hurt you, you can still pull them up on it - “Be careful saying that, you could really hurt someone's feelings.”

Regardless of their reaction, you know you did everything you could by expressing what treatment you will and won’t accept.

And that is what’s important!

So there you have it. Now you’ve got some fall-back options to feel empowered in any situation and help progress equality for yourself, while having an impact for women everywhere, even in the face of adversity.

If you personally find it difficult to stand up to the patriarchy (and let’s face it, don’t we all!), you may find it empowering to surround yourself with other like-minded, encouraging women.

The type who you can be yourself around - and who you can share your goals with, while encouraging each other to reach your full potential.

I’d love to invite you to join our remarkable community, where empowered women empower women! Join the conversation by signing up for our Facebook Group here: link.