Modern slavery in the fashion industry 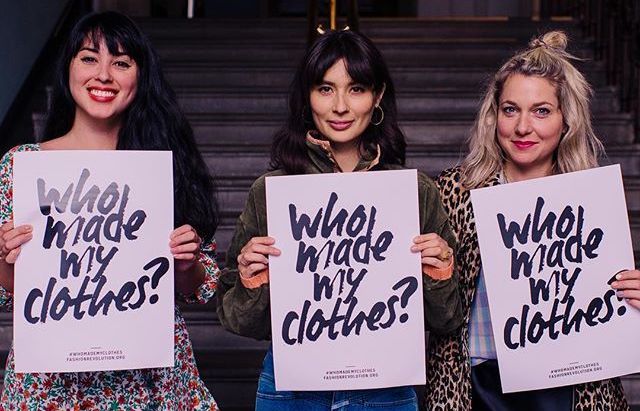 “If your feminism doesn’t include the women who make your clothes, it’s not really feminism.”

Did you know that 1 in every 130 females (women and girls) around the world fall victim to modern slavery? Slavery might sound like something from another century, but it’s a very modern problem that affects more than 40 million people around in the world.

And you could be inadvertently supporting it every time you shop.

The Department of Home Affairs describes modern slavery as being a situation where offenders use coercion, threats or deception to exploit victims and undermine their freedom.

Practices that constitute modern slavery can include:

Most modern slaves are women and many work in sweatshops in Asia, creating what’s called “fast fashion”.

Fast fashion is a term used to describe the exploitative practice of replicating catwalk trends and mass-producing them at low cost.

A 2019 report by Oxfam called - “Made in poverty - The true price of fashion” – interviewed 472 garment workers in two of Australia’s key sourcing countries, Vietnam and Bangladesh. The report revealed disturbing results, including:

- Nine out of 10 workers interviewed in Bangladesh cannot afford enough food for themselves and their families, forcing them to regularly skip meals and eat inadequately, or go into debt.

- 72% of workers interviewed in Bangladesh factories supplying major brands in Australia, and 53% in Vietnam, cannot afford medical treatment when they get sick or injured.

- 76% of workers interviewed in Bangladesh factories supplying to major brands in Australia have no running water inside their home, and more than 40% in Vietnam reported worrying about having to use well or rain water.

- In Bangladesh, one in three workers interviewed are separated from their children, with nearly 80% of those cases due to a lack of adequate income.

Modern slavery is also rife in China. In August, Shein was called out by Reuters for failing to make public disclosures about working conditions along its supply chain that are required by law in the United Kingdom and Australia, and until recently, falsely stated on its website that conditions in the factories it uses were certified by international labour standards bodies.

The lure of a bargain

We all love a bargain - it feels so exciting to score one - but we need to consider the true price of that cheap item.

While fashion and clothing are tools women use to feel empowered, it’s a hollow victory when it comes at the cost of using modern slaves from poorer countries.

The Remarkable Woman is passionate about fighting for equal pay for ALL women, and now is time to act.

The co-founder of Walk Free, a global human rights organisation that aims to eradicate modern slavery within our lifetime, Grace Forrest, recently noted in The Australian: "If your feminism doesn’t include the women who make your clothes, it’s not really feminism.”

A Deloitte Access study for Oxfam found factory workers were on average paid 4% of a garment’s retail sale price. That means when a $25 dress is sold in a fast-fashion house, only $1 goes into the pocket of a worker.

By increasing the retail price of a $25 dress by just 1%, the woman who made it would earn enough money for basic needs. That means you would pay just 25c extra for the dress.

It doesn’t seem too much to ask, does it?

Where Australia stands on modern slavery.

The recent introduction of the Modern Slavery Act has made Australia one of only a handful of places with legislated reporting requirements on modern slavery practices. Sadly, however, it doesn’t go far enough to address the issue.

The Monash Centre for Financial Studies recently investigated the modern slavery policies of the 100 largest listed companies on the ASX and found many of them fall short in their commitment to eradicating the abhorrent practice.

Lead researcher Dr Nga Pham and her team found that the companies that scored highly had two things in common — a large number of employees and big supply spends. They had also made managing modern slavery risks a priority.

“This meant that they were transparent in how they assess and address the risk of modern slavery practices in their operations and supply chains and monitor such actions against the mandatory criteria outlined by the Commonwealth Modern Slavery Act,” Dr Pham said.

How to shop ethically

It’s not always obvious whether a brand is ethically produced, but it’s important that we investigate companies and decide whether we should be supporting them.

Oxfam has released a report and company tracker to show how big brands are acting in the space. H&M Group performed relatively well, with Big W, Kmart and Target Australia close behind, followed by Cotton On, Zara and Myer. However, the survey rated The Just Group and Mosaic Brands as the worst performers.

Meanwhile, Ethical Clothing Australia (ECA) is an accreditation body that works collaboratively with local textile, clothing and footwear businesses to protect and uphold the rights of Australian garment workers.

To be ECA accredited, a business’s manufacturing operations are audited from design to dispatch to ensure that local workers, including outworkers, are being paid appropriately, receiving all their legal entitlements and working in safe conditions. By supporting an ECA accredited business you’re valuing the rights of our local garment workers.

How to dress ethically

- If you lose a button or have a stuck zipper, repair it rather than throwing the garment away

- Buy from local designers who are ECA accredited

- Ditch the fashion FOMO and invest in quality pieces – they may come with more expensive price tags, but they will serve you better in the long run

- When purchasing clothing, choose versatile pieces that can be worn with multiple outfits

Dressing ethically is a great step, but it doesn’t put food on the table for factory workers who aren’t being paid a living wage.

It’s time to put pressure on companies to lift the wages and working conditions of their employees. Write directly to fashion brands – via social media, email and direct mail - insisting they no longer use materials sourced using modern slavery.

We also need to vote with our debit cards on the issue and pay more for our clothing to ensure women in developing countries suffer less.

Join a community that empowers each other, where you can meet like-minded women, get support and be supported. If you are planning to open a business, our mentorship program can help you get there without jeopardising others. Join The Remarkable Woman!