It can be easy to forget how far we’ve collectively come as women. It seems like we’re always trying to shatter the glass ceiling in front of us, and even though we are making progress, it’s exhausting work. So, let’s energise ourselves by remembering the inspirational women in history who smashed the glass ceilings in front of them and continue to inspire us to overcome adversity. 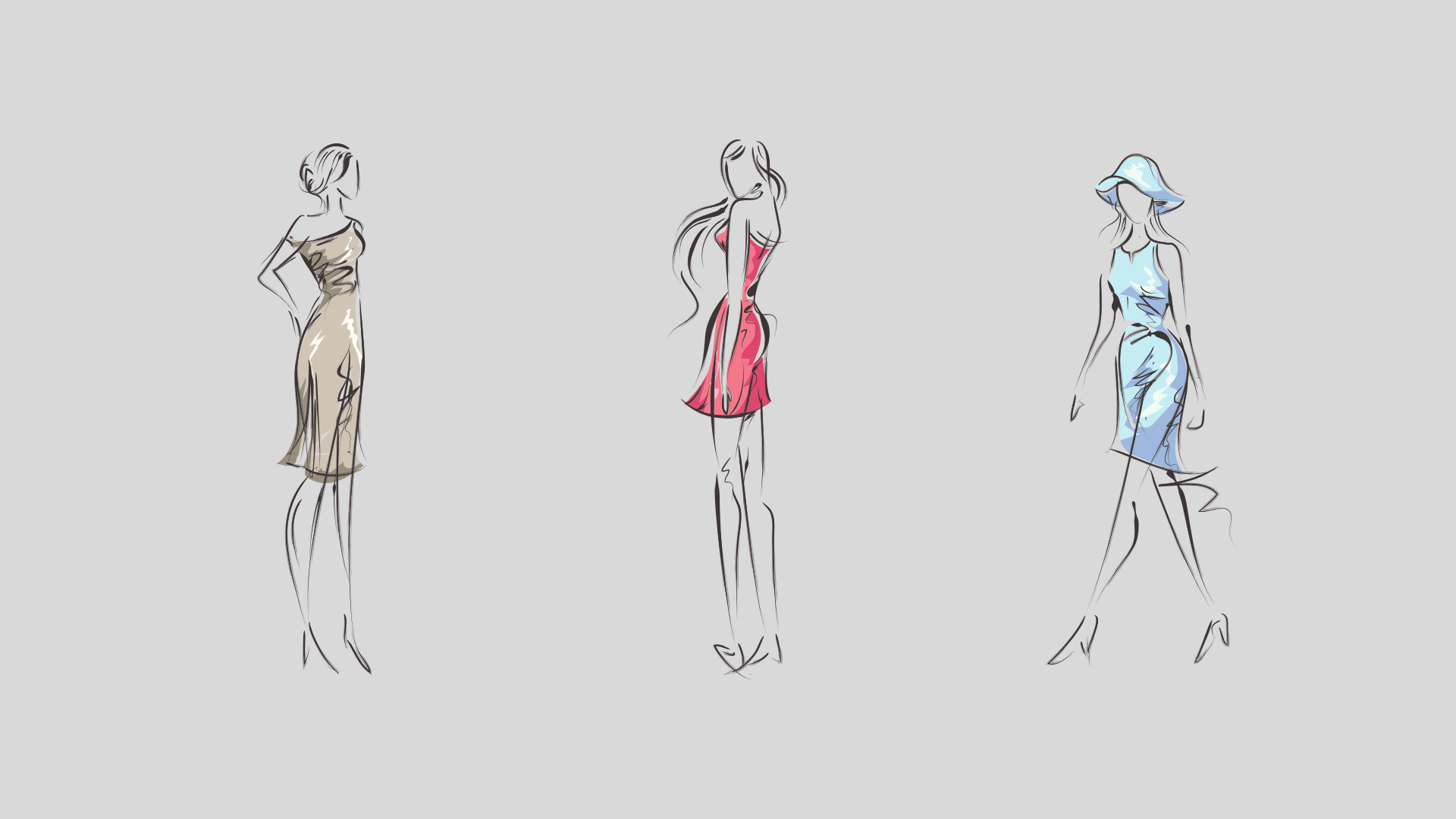 “If I’m going to sing like someone else, then I don’t need to sing at all” – Billie Holiday

Born in the late 20s, Maya Angelo was welcomed into the world by The Great Depression. But that only fuelled her ambitions from an early age. She was highly decorated, receiving multiple awards and over 50 honourary degrees for her contributions to literature, performance and activism. Maya used her poems to exemplify the cry of African Americans as they fought for equal rights. She was hailed “a new kind of memoirist” as she used her artistic mind to peel off the veneer blocking reconciliation.

Maya is best known for her poem ‘I Know Why the Caged Bird Sings’, which stands as a defense of black culture, ultimately paving the way for black women to work toward scholarship in the fine arts. Her writings served as a zeitgeist for further feminist literature that showed women the importance of their own self-revelation and to open themselves up to the world without shame.

with a fearful trill

but longed for still

and his tune is heard

on the distant hill

for the caged bird 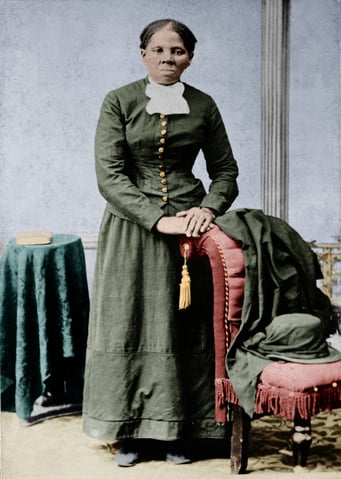 Harriet Tubman was born into slavery in 1822. As a child, she experienced beating and whippings by various masters. Worst of which was a traumatic head wound caused by a projectile weight, thrown by an angry master. She suffered pain, dizzy spells and hypersomnia for the remainder of her life. At the age of 27, Tubman fled her captives, but then shortly returned only to rescue her family. But she didn’t stop there, Tubman kept going back to her plantation to rescue more slaves. They’d travel by night to avoid being seen, and would rely on the ‘Underground Railroad’, a network of people who offered aid to escaped slaves. The slaves would start to call her ‘Moses’ because they saw her as the chosen one, sent to deliver them from their oppressors.

Even after the Civil War ended, Harriet Tubman refused to hang up her hat. She dedicated the remainder of her life to helping impoverished ex-slaves and the elderly. It’s no wonder that by popular demand, Harriet Tubman is the new face on the American $20 bill. 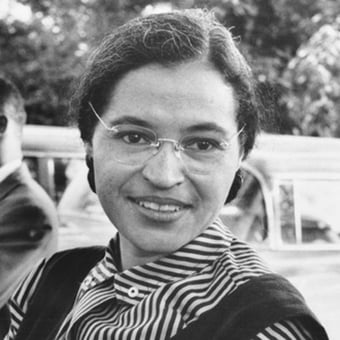 Rosa parks was 1-year-old when WWI broke out. She, and other African Americans were subjugated by a set of legislation known as the ‘Jim Crowe Laws’. These laws enforced racial segregation for blacks, extending to the use of public facilities like transport, restaurants, swimming pools and restrooms. The laws made it clear that black existence would be reluctantly tolerated, but mixing with white people would not. Facilities that were acceptable for African Americans has were labelled with a sign saying ‘Colored’, otherwise, it was off-limits. In this kind of culture, where blacks were marginalised by whites, Parks did something so courageous that it became the spark that set fire to the Civil Rights movement.

On 1 December 1955, Rosa Parks was minding her own business in the back of a Montgomery bus, where she was supposed to be in the ‘Colored’ section. The bus was overcrowded. When a white passenger proceeded to board, the bus driver asked Rosa to give up her seat and let the passenger sit down, because the ‘White’ section of the bus was already filled. Rosa refuses and the bus driver called the cops. Her incarceration indelibly shifted the attitudes of black America towards change. African Americans would organise a 13-month Montgomery bus boycott. This paved the way for a 26-year-old Martin Luther King Jr. to inspire a nation with non-violent activism, and plant a dream in their hearts of a day when all men and women are equal.

Amelia Earhart was passionate about flying. When flying for the first time she recounts: “By the time I had got two or three hundred feet off the ground, I knew I had to fly.” However, Amelia had a huge glass ceiling to break before she even thought of stepping into the pilot’s seat – there weren’t any female pilots.

Amelia worked hard and saved up enough money to buy her own plane, which she used to set her first women’s record by rising to 14,000 feet. But, she wasn’t done, Amelia wanted to be the first woman to fly over the Atlantic. Three women had died in the last year trying to achieve the accolade, but Earhart wasn’t intimidated by this. She took on the challenge and became the first women ever to fly over the Atlantic. Earhart’s accomplishment shifted the narrative of the age, because it showed everyone that women were equal and capable in “jobs requiring intelligence, coordination, speed, coolness, and willpower.” 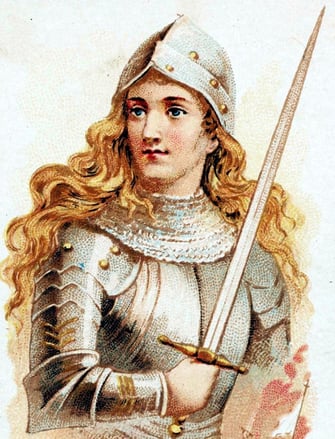 Joan of Ark’s story is one of how our beliefs can change our life and the lives of others. It’s an incredible tale of a peasant girl, who couldn’t read or write, leading an army to victory at the age of 16. It was her charisma and passion that gave people the confidence to believe in her mission to free France from English rule. Unfortunately, the story has a horrific end, as the King refused to heed Joan’s warning that the enemy would recoup if they weren’t completely dealt with. Her intuitions proved true when the Anglo-Burundians fortified their position and led a counter-attack. Joan of Arc was thrown off her horse as she tried to protect the town’s inhabitants, and watched at the city closed its gates and left her behind. It gets worse – Joan gets captured by the enemy, and they’re terrified of her and what she was able to achieve, so they cast her as a witch and burnt her alive at the stake. She was 19  years old.

This only increased the fame of Joan of Arc, and instead of extinguishing her, it scorched her name into the hearts, minds and history books of the Western canon. It’s the ultimate tale of having the courage and conviction to help those who are being persecuted around you. 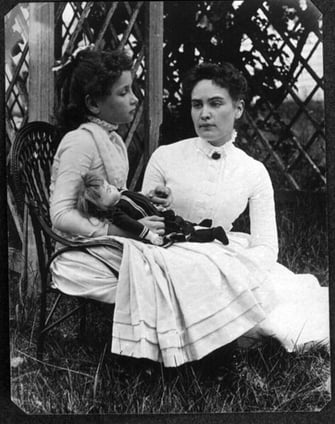 Can you imagine being both blind and deaf? Helen Keller was born deaf and blind in the 1880s. There were no technological advancements to help her cope with her condition, and according to the ideals of the time, she would never live a normal life. Helen’s family, unable to help, felt that she'd at least have proper assistance in a medical institution. Thankfully there was help, and it came in the form of Anne Sullivan, a gifted and committed young teacher.

Teaching Helen wasn’t easy, it was more like a dramatic struggle. Between Helen's tantrums, her unpredictable episodes of curiosity and defiance, Anne Sullivan slowly chipped away at the task.

Here's an insight into Anne Sullivan's unwavering dedication. “Sullivan taught Keller the word "water"; she helped her make the connection between the object and the letters by taking Keller out to the water pump, and placing Keller's hand under the spout. While Sullivan moved the lever to flush cool water over Keller's hand, she spelled out the word w-a-t-e-r on Keller's other hand. Keller understood and repeated the word in Sullivan's hand. She then pounded the ground, demanding to know its "letter name." Sullivan followed her, spelling out the word into her hand. Keller moved to other objects with Sullivan in tow. By nightfall, she had learned 30 words.”

It's a story of devotion and unrelenting persistence in the face of seemingly insurmountable odds.

Billie Holiday was a jazz vocalist who influenced music as we know it. Her seminal way of creating musical phrases and playing with tempos brought new concepts to the idiom. She's considered one of the best jazz vocalist of all time.

Holiday’s tumultuous childhood saw her skipping school and ending up in truancy court, which sent her to a facility for troubled African American girls. She was returned to her mother one year later and suffered sexual assault from her neighbour. At the age of 14, she became a victim of sex trafficking, working in an illegal brothel until the ‘house’ was raided and she was sent to prison.

After this ordeal, Holiday started singing in night clubs. She had plenty of pain and turmoil to draw upon, and that affected her sound, leaving a lasting impression on the people who heard her. Her career as a singer would continue to soar, as she held her own with jazz’s most iconic performers and composers. Today, she's be remembered as one of the greatest musicians that ever lived. Holidays’ story is a reminder to all that it doesn’t matter how you start, it matters how you finish.

“If I’m going to sing like someone else, then I don’t need to sing at all” – Billie Holiday