Well, what an incredibly eventful week we’ve had ladies! There were just too many news items I wanted to discuss with you all, but to save you reading until the wee hours of the morning (you’re welcome 😊) I’ve managed to dwindle it down to four snappy articles and a video of a squirrel that had me in absolute stitches!

International Day for the Elimination of Violence against Women

Wednesday 25 November was the International Day for the Elimination of Violence against Women and it’s a sobering reminder to all of us that although we have made great strides, women all around the world are still victims of violence.

It’s an issue that has become so much worse this year due to many women being confined in their homes with abusive partners as a result of the pandemic and quarantines. According to WHO, globally, 1 in 3 women experience physical and/or sexual violence in their lifetime, mostly by an intimate partner. Meanwhile, the UN cites that 18% have experienced such violence in the past 12 months and that this year, 137 women have been killed by their intimate partner or a family member every day.

It’s a sobering realisation and, while we might consider ourselves the “lucky country”, we’re not doing too well here in Australia either.

The day was marked all around the world in different ways. In Toronto, Canada, men walked ‘a mile in her shoes’ to raise awareness. A mile in heels for anyone would be tough so hats off to these Canadian gentleman! 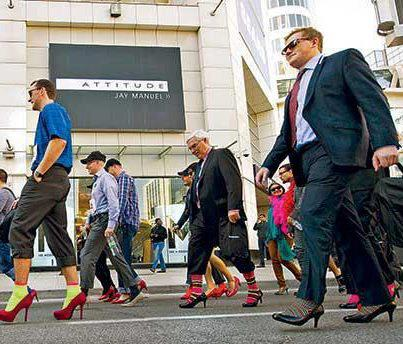 For the past 5 years, 1 woman a week has been murdered by her current or former partner here in Australia.

Now, I want you to look to the woman to the left of you… and then look to the woman on your right. Statistically speaking, at least 1 of you has experienced physical violence since the age of 15. Grab another one of your girlfriends and at least 1 of you will have has experienced emotional abuse, physical or sexual violence by a current or former intimate partner since you were 15.

These numbers aren’t improving either. Australian women are nearly three times more likely than men to experience violence from an intimate partner, and almost 10 women every day are hospitalised for assault injuries perpetrated by a spouse or domestic partner.

It’s horrifying stats like this that show us why days like the International Day for the Elimination of Violence against Women are still so necessary. Because even though we may have the right to vote, hold leadership positions and educate ourselves – society as a whole still has a long way to go.

Part of the problem with women being trapped in abusive relationships is that many lack the financial and economic independence to break free of the cycle. And when you consider that the WGEA’s latest Gender Equality Scorecard has found a 20.1% gap between men and women, it’s no surprise. Although the gap may be closing, with the 2019/20 WGEA report reporting it’s down by a tiny 0.7% - it’s happening at a glacial pace and men still take home $25,534 a year more than women on average.

Although 76% of organisations now have an overall gender equality strategy or policy in place, at least 25% of these companies haven’t taken any actual meaningful steps to address these policies. Of those employers who actually undertake a gender pay gap analysis, only 54% actually take steps to try and close this gap.

Basically, it’s a lot of talk and showmanship with very little meaningful action.

That said, this data only covers the period up until March 2020 so I’m interested to see how the stats will change when the year has been nominated by pandemic practices which have meant many people working from home.

The increase in flexible working arrangements over the past year has definitely been a game-changer although this has been balanced against the fact that the casual workforce (dominated by women) has suffered greatly as a result of the pandemic.

I’ll be keeping my eyes peeled.

It wasn’t too long ago that Australia finally got rid of the “period tax”- a policy which meant that GST was charged on essential feminine hygiene items like pads and tampons. Meanwhile, on the other side of the world, Scotland has become the first country to provide free and universal access to menstrual products, including tampons and pads, in public facilities.

Back in 2017, a survey from Plan International UK found that 1 in 10 girls in the United Kingdom were unable to afford sanitary products. And so, after lawmakers had initially signalled their support, the Scottish Parliament voted unanimously in favour of the Period Products bill on Tuesday. Under this new ruling, period products will be available to access in public buildings (including schools and universities) across Scotland.

It’s utterly fantastic news and is the next step after countries like England and New Zealand launched initiatives to provide free feminine hygiene products in schools over the last 12 months.

As stated by Monica Lennon, the lawmaker who introduced the bill last year,

"The campaign has been backed by a wide coalition, including trades unions, women's organisations and charities. It’s a signal to the world that free universal access to period products can be achieved."

So come on Australia, it’s time to step up.

Since the beginning, Biden has always promised a White House staff that reflected the US – a staff that is diverse in terms of culture and gender.

I’m pleased to note that when we look at his senior staff, Biden certainly has kept to his word, with POC making up 41% of the team and women making up 53%.

The group of 9 was announced earlier this week, with 4 men and 5 women leading the charge. Biden-Harris campaign manager, Jennifer O’Malley Dillon, has stepped up as the Deputy Chief of Staff while Dana Remus will take her place as White House Counsel. Lawyer, Julissa Reynoso Pantaleon has also been appointed Chief of Staff to First Lady, Jill Biden while Julie Chavez Rodriguez will be taking up the reins as the Director of the White House Office of Intergovernmental Affairs. And finally, Annie Tomasini, who currently serves as President-elect Biden’s travelling Chief of Staff, has been appointed Director of Oval Office Operations.

These aren’t the only powerful women leading the country either. Janet Yellen is poised to become the first female Treasury secretary and one of few people ever to have wielded economic power from the White House, the Federal Reserve and the president’s cabinet. We’ve also got Michele Flournoy as the hot favourite to lead the Pentagon while Avril Haines has been named the Director of National Intelligence. And let’s not forget Kamala Harris who, on January 20, will become the first female Vice President in US history.

With so many women breaking these glass ceilings, I genuinely hope that these systematic changes will be the catalyst that finally yields parity between men and women in leadership roles in government, the corporate world and beyond. It may be a long journey, but at least we’re finally on the right path.

Having a squirrel of a time!

Our friends over in the US have been celebrating Thanksgiving, and it looks like the festivities haven’t just been restricted to the human-folk as our little squirrel friend has an absolute ball after eating a fermented pear! Click the image below to watch! 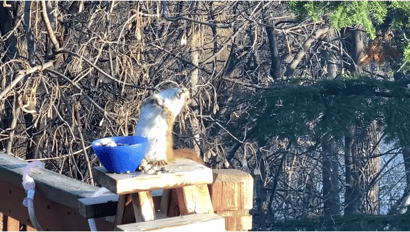