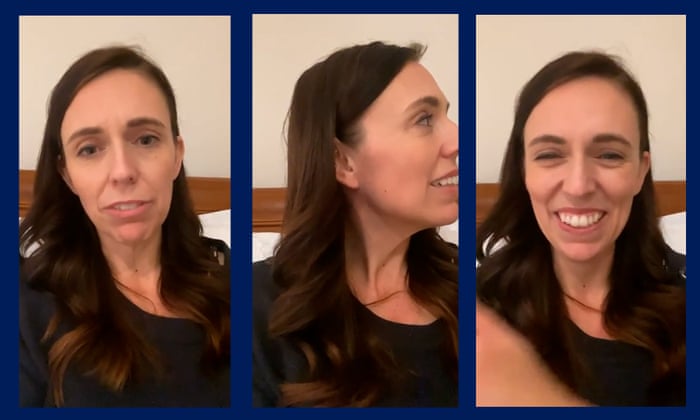 Women under 25 are the most financially vulnerable during the pandemic and here’s why the affairs of state can wait!

Amongst the highs, lows and in-betweens of this week, I’ve once again been inspired by former Australian Prime Minister Julia Gillard’s efforts to advance gender equality. Gillard spoke at the 2021 ANZ Finance & Treasury Forum this week, urging businesses not to let remote working be a setback in the fight for gender equality.

This is a subject close to my heart. As my team at The Remarkable Woman work remotely and I am constantly inspired by the results they achieve. My staff don’t need to be sitting in the same office as me for their efforts to be recognised, seen and praised!

In other news, I love how Jacinda Ardern continues to be so real and relatable. Her latest bedtime parenting “fail” on Facebook Live has gone viral around the world proving that women can do it all!

More on this and other stories by yours truly!

So come mentoring time, opportunity time, and promotion time, it will be the men who are remembered and who stand out. If that's where we end up, I think gender equality statistics at work could go backwards.”

Gillard said businesses needed to be careful that their approach to flexible attendance does not unintentionally advantage those who work in an office over those who work remotely.

“This is an era, I think, where we could turbocharge gender equality at work or we could make some pretty big errors,” she noted. “I think in most businesses which of those two futures we're going to realise is being decided right now.”

Gillard said the challenge for businesses was to ensure clarity around merit in their organisations, warning that it “can’t default to presenteeism".

“The evidence tells us the clearer and more objective merit definitions are, the more gender blind they are,” she said. “And the more subjective they are, the more unconscious bias comes into play.

“Getting that correct right now, thinking about what merit is at work, and how it will be fairly measured across workers who were both in and outside the office environment – that is key if we're going to put together this future in a way that enhances gender equality.”

Her concerns are backed up by the latest Financy Women’s Index (FWX), which shows that while financial outcomes for women have improved nearly two years into the COVID-19 pandemic, Generation Z is at risk of being left behind.

According to Financy, the biggest risk moving forward is that women, particularly those aged under 25 years, emerge from the pandemic in a far worse financial position than when it began.

“Full-time employment numbers of women under 25 years continue to lag both genders and all age groups and were down 9% in the September quarter and were 10% lower (in full and part-time) on September 2019 figures.”

Clearly, there is an imperative need beyond statistics and that is the financial livelihood of our young women.

Businesses need to get one thing straight: it’s not about who looks like they’re working the hardest or longest, it is about the outcomes their employees achieve, tangible and intangible.

Rewarding staff based on their results and not for who slaves away the most hours at the office is a managerial mindset that needs to be a part of and included in your organisational planning, processes and systems. Without accounting for this, you cannot expect to achieve employee equality and progressively, gender equality in the workplace.

And here we are, first the mining industry and now the construction industry is the latest sector to be called to account over gender discrimination, with experts demanding mandates and quotas.

Construction is Australia’s second most male-dominated industry behind mining, with women making up just 18% of the overall workforce, which plummets to 2% for trade roles.

Women also only make up 15% of key management roles, 11% of director roles and 3% of CEOs.

As for the gender pay gap, it stands at a gaping 26%, which Kristine Scheul, the national chairperson of the National Association of Women in Construction (NAWIC), says is “unconscionable in 2021”.

Scheul told ABC RN's Big Ideas that gender discrimination continues to be a persistent problem. She gave the example of some Australian construction sites not even having women's toilets.

"[Others have] women's toilets or showers but they don't lock … It's things like that, where if women do not feel safe coming to work or do not feel safe on site, they're going to stay away in droves," she said.

Yes, you read that correctly. Women in construction are unable to relieve or care for themselves comfortably and safely at work and quite frankly, it’s appalling.

Scheul is calling for more women in leadership roles to help break down the perception that the trades are “men’s jobs”.

While conservative voices in the construction industry scoff at calls for mandates or quotes to drive change, ACCIONA Australia and New Zealand recently put the concept to the test, with fantastic results.

It decided to employ a workforce for a recent construction project that was made up of 50% women.

"We wanted to break the paradigm," COO Andre Noonan said.

The result? The project finished ahead of schedule and ahead of budget.

"It's very unusual for us to finish ahead of time and ahead of budget,” Noonan said. “So that was an excellent outcome."

This is an excellent example of how outdated perceptions about “women’s jobs” aren’t reflected in outcomes. Construction companies need to learn from the progressive lead ACCIONA’s has taken in shattering sexist perceptions about women in construction.

Why women’s voices still aren’t being heard in media

The Women’s Leadership Institute Australia (WLIA) has released its 2021 Women for Media report, which reveals a pretty sobering picture of the way male voices still dominate the media.

The report examined online articles published in the month of May – a huge sample of over 57,000 stories. It explored how many women were quoted in stories, as well as how many females wrote them.

Disturbingly, the extent of mens’ over representation varied from 54% of quotes in arts and entertainment to 70% in politics, 76% in business and 84% in sports.

“Women hold up half the sky, but we don’t have the opportunity to wield half the influence.

Media will follow society. We need urgent and dramatic change to shift gender representation in politics, business and sport, both in the media reporting on them and the industries themselves.”

Dr Price believes politics is the perfect place to start.

“The Liberal Party must have an internal revolution and set quotas – Labor and the Greens already do this,” she said.

The voices of female journalists are also grossly under-represented. The report found that men had the first (or only) byline in 65% of stories, compared to women with 35%.

Director and co-founder of Media Diversity Australia (MDA) Antoinette Lattouf says the majority of Australian media organisations don’t have clear policies or plans to ensure diversity of any kind, be it race, ethnicity, disability or gender.

She said that is true both for the sources used in stories and in recruitment, where she says media organisations, unlike corporate Australia, are yet to recognise the commercial benefits of diversity and inclusion.

MDA now provides a database of culturally and linguistically diverse women experts for journalists to access for free.

“We were sick of seeing the same people being interviewed on a range of topics like North Korea or Islam and reproductive rights or south-western Sydney and nine times out of ten, it’s a white guy called Andrew, John or Michael who went to a sandstone university,” said Lattouf.

As someone who also works within the media as part of my mission to see a fair and equal world, statistics like these tell me that we cannot slack off now, not when we have so much work to do and so I urge you to use this evidence of inequality to fight against the underrepresentation and misperception of women in media.

The next Women for Media report must reflect a more equitable balance that better represents Australia’s diverse society. Despite this, I am proud that The Remarkable Woman seeks female voices each week when we report on the latest news and I assure you that we will absolutely continue to do so.

Disturbing revelations surrounding the Australian government failing to follow through on its promise to take action on behalf of the 13 Australian women who were subjected to invasive gynaecological searches at Doha airport last year leaves me shaking my head in disappointment.

More than 18 women on 10 Qatar Airways flights from Doha, including the 13 Australians, were subjected to the examinations late last year as authorities searched for the mother of a newborn baby found abandoned in an airport bathroom.

The examinations, which were conducted without the women’s consent, caused outrage in Australia and around the world, with the actions likened to sexual assault.

The women, aged between 30 and late 50, have suffered ongoing mental health difficulties from the incident, including post-traumatic stress disorder, anxiety, a fear of flying and some have had to take time off work and seek psychological counseling.

They are disappointed, rightly so, that Prime Minister Scott Morrison says the situation had indeed been dealt with.

When asked at a media conference last week what the Australian Government has been doing to help the women, Morrison replied: “Well what I’m pleased about is the representations that we’ve made. I’m very pleased.

“But there was an investigation, there has been a conviction, and there’s been a significant change to airport processes in Qatar.”

However, the women say they haven’t heard about any change in practices.

One told 60 Minutes: “I think we’ve been ignored. And yeah, the Australian government hasn’t come across as a strong support at all, and we feel pretty angry about that.”

The women are launching legal action to highlight their case ahead of the 2022 World Cup in Qatar, to warn other travellers.

“They should be aware that – whilst there is a guise of a highly developed, highly modernised airport and national carrier – these events have happened and there’s nothing preventing them from happening again,” their lawyer Damian Sturzaker said.

Morrison needs to back up his claim that practices have changed at Doha airport and ensure the rights of women staying or transiting through Qatar are protected moving forward. The hurt and trauma that these women have endured does not excuse ignorance and lack of communication or confirmation from the government.

Jacinda Ardern has described a recent incident on Facebook Live involving her daughter as a “fail”, but it looks like a parenting win to me!

The New Zealand prime minister was updating the nation on COVID-19 restrictions when her three-year-old daughter Neve started calling out “mummy”.

“You’re meant to be in bed,” the prime minister told her daughter. “It’s bedtime darling – pop back to bed and I’ll come and see you in a second.”

“Sorry everybody,” Ardern said when she returned to the livestream. “That was a bed-time fail wasn’t it? Does anyone else have kids escape like three, four times after bedtime?”

It was a relatable moment for the many parents and one I’ll soon be able to relate to in a few years time.

When Ardern’s daughter interrupted again a few minutes later, she told the toddler: "I'm sorry, darling, it is taking so long. Okay. I'm sorry, everyone. I'm going to just go and put Neve back to bed. Because this is well past her bedtime. Thanks for joining me."

The incident has gone viral around the world and I think it sends a heart-warming message and much needed reminder about work-life balance - if Jacinda Ardern’s affairs of state can wait when her child needs a hug and attention, yours can too.