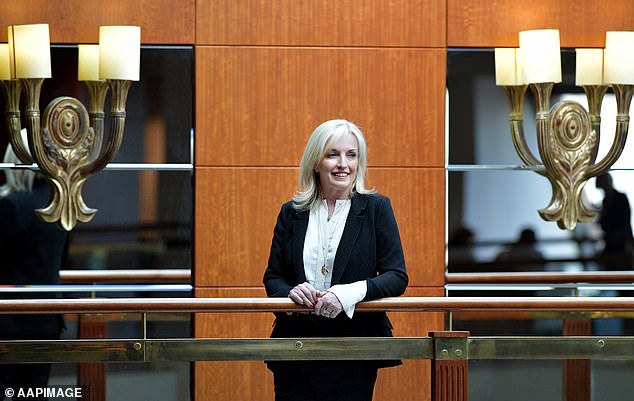 Christine Holgate stands up, the biological clock is challenged and a tribute to Carla Zampatti.

We find ourselves at Friday afternoon again and wow, what a week it’s been!

On Australian shores, we watched ScoMo take the stage again and with his lack of apology to Christine Holgate, only to remind us of his disregard for the treatment of the women of this country. We bid farewell to fashion icon and remarkable woman Carla Zampatti. Beyond our shores, we saw the world continue to stand up for women’s rights. Let’s get you wrapped up!

Sorry seems to be the hardest word

Some of you may remember that we covered the Christine Holgate (former CEO of Australia Post) saga back in October 2020. When everyone else was silent, we shouted out in big, bold letters that Holgate was NOT a villain and that, despite the blustering of ScoMo, she had not misappropriated any funds and actually led AusPost to profits.

After being forced to step down, Holgate has now stepped up and delivered a powerful statement in front of the Senate Estimate:

“The chair of Australia Post not only unlawfully stood me down, he lied repeatedly to the Australian people and to their Parliament about his actions… Yet I lost my job, a job that I loved, because I was humiliated by our prime minister for committing no offence and then bullied by my chairman who unlawfully stood me down under public direction of the prime minister. This made my leadership at Australia Post untenable and seriously threatened my health...

I was bullied out of my job. I was humiliated and driven to despair. I was thrown under the bus of the chairman of Australia Post, to curry favour with his political masters. But I’m still here and I’m stronger for surviving it.”

In light of the sexual assault claims devastating Parliament, Holgate rightfully points out that ScoMo has people in his Cabinet who are accused of things far worse than buying four watches a couple of years ago. And yet, unlike Holgate, these men have been allowed to keep their jobs and represent the Australian people - they have not been publicly denounced by ScoMo. He has not claimed to be “disgusted” or “appalled” by their actions (words he used against Holgate).

And, true to form, ScoMo has not yet apologised, instead choosing to dance around and mince words. He “regrets” his language; he believes that it was important to show “respect” to the taxpayers; it was not “his intention” to cause distress. The language that ScoMo uses is carefully calculated to avoid accepting any responsibility or accountability for his actions. It artfully sidesteps his mismanagement and places the blame on a disembodied situation.

The women of Pakistan deserve better

In Pakistan, 85% of women have experienced violence from an intimate partner. The sad reality is that for the majority of Pakistani women, sexual violence is a common event within their own homes, and despite changes to the law, the perpetrators often go unpunished. This stance was mirrored when, just last week, Pakistan’s PM made some explosive statements on TV.

During a television interview, PM Imran Khan blamed the rise in sexual assault cases on the way women dress. He said that women in Pakistan should remove "temptation" because "not everyone has willpower" and advised them to wear more modest clothing around men.

A statement condemning the prime minister's comments and demanding an apology has been co-signed by multiple human rights organisations and hundreds of individuals. It states that Khan’s words were not only factually incorrect but also "actively fostered and promoted rape culture". One Pakistani woman put it best when she tweeted:

“It’s hard enough being a woman in this country, we’ve seen how easily the victim is blamed and our PM just validated this backward thinking men have. We honestly deserve better than this.”

Hundreds have gathered to mourn the passing of Carla Zampatti, Australia’s most iconic fashion designer.

Zampatti established her brand in Sydney back in 1965 while, at the same time, going through a divorce and raising her first child as a single mother. She had to rely on a family loan of $5,000 to open her first shop in Surry Hills (back then, Australian women couldn’t get a bank loan without their husband’s signature and on that day, a legend was born.

In the decades following, Zampatti not only created countless collections but became a shrewd businesswoman, an advocate for migrant and women’s rights, a cultural philanthropist and a member of boards including SBS, McDonald’s and Westpac. She was appointed a Member of the Order of Australia in 1987 for service to the fashion industry as a designer and manufacturer and, in the 2009 Queen’s Birthday Honours, she was made a Companion of the Order of Australia (AC) for her service through leadership and management roles in the fashion and retail property sectors, multicultural broadcasting and as a role model and mentor to women.

Although we have lost a fashion icon far too soon, we take a moment today to appreciate and celebrate everything she has achieved and her effortlessly stylish legacy of empowering women.

Let’s wind back the biological clock

I’m sure many of you have felt pressure to start a family. “You’re not getting any younger” and “Your biological clock is ticking” are phrases that are all too common. Putting aside the highly problematic nature of those statements (women are not baby-making machines), the fact is that the idea of fertility dropping off a cliff after you turn 35 just isn’t true.

Did you know that if you have a child after 35, you’re described as a “geriatric mother” of “advanced maternal age”? Your pregnancy is labelled high-risk because your baby will encounter all of these potential problems. So says the study that claims fertility drops off after 35. But here’s the kicker - that study was from over 300 years ago - back when doctors said smoking was good for your health and that joining the workforce would dry out your uterus.

Well, according to a new study from the American Medical Association, the optimal reproductive years have increased from 35 to 37.1 and, rather than a cliff dive into infertility, it’s more of a gradual decline. But regardless of the numbers, the fact remains that each woman’s pregnancy journey is different and unique and above all - her choice. So stop watching the clock and start enjoying the best time of your life.