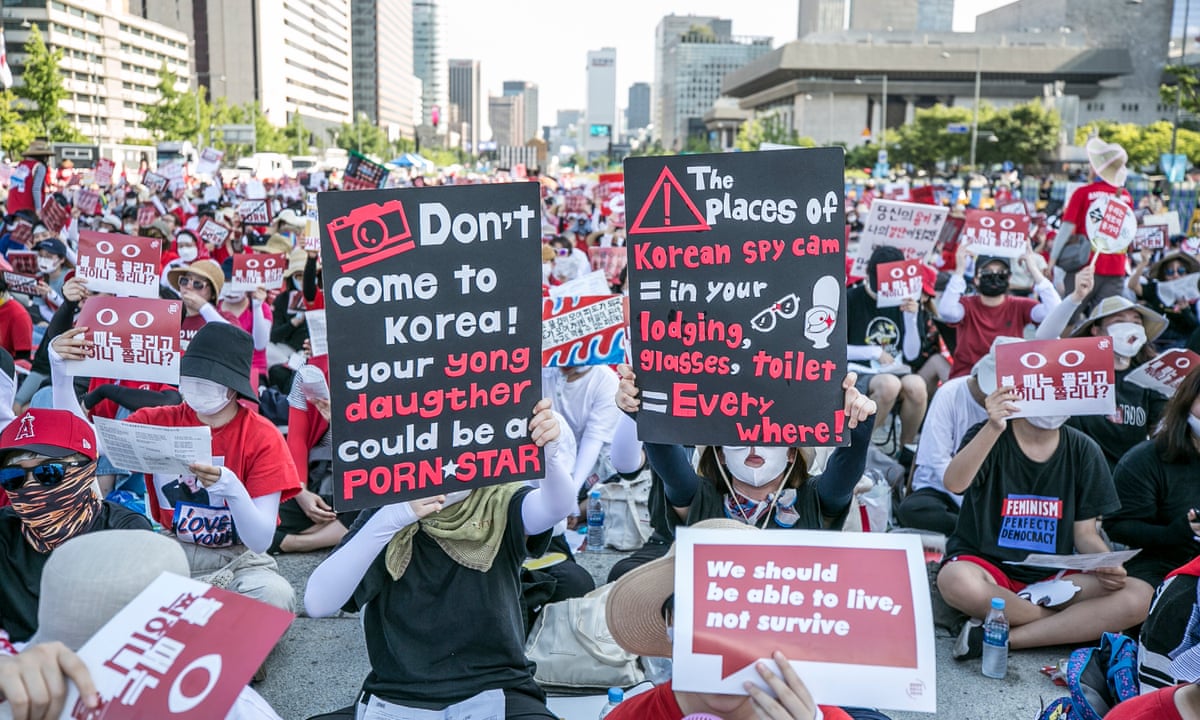 The toxic reign of NY governor Andrew Cuomo is over, while the Australian government could learn a few lessons of its own on the harm caused by insensitive words.

For those of you in Australia, what was your verdict on the 2021 Census? We found it simultaneously uninspiring and concerning - there were so many questions it didn’t ask that would have provided a much clearer picture of Australia. And our hearts went out to the women who were blindsided by its insensitively worded question about fertility.

However, our spirits soared at the news Andrew Cuomo, who was accused of sexual harassment by multiple employees, will be replaced by New York’s first-ever female governor. Can you believe it’s taken this long for a woman to step into the role?

Here’s the lowdown on the issues and advances that have captured our interest this week.

Cuomo resigned following an investigation into sexual harassment allegations against him. A report by New York Attorney General Letitia James concluded Cuomo and his aides had created a toxic workplace, through bullying, fear and intimidation.

In response, the governor filmed a video apology that implied his accusers had misinterpreted his words and gestures. He attributed his behaviour to a generational shift in social norms and insinuated that the scandal surrounding him was politically motivated.

His personal lawyer, Rita Glavin, argued Cuomo had behaved the same way with men as he did with women, touching them and asking them personal questions. However, Christian Nunes, president of the National Organization for Women, told CNN the allegations against the governor constituted a violation of workplace boundaries, regardless of the person's gender.

We’d have to agree. As we noted in our newsletter last week, his “apology” was a disappointing example of victim-blaming and workplace gaslighting. Whatsmore, we’ve all been taught to “keep our hands to ourselves” since we were a few years old. There really is no excuse.

Hochul is an eminently qualified candidate to replace Cuomo. She’s an experienced politician and lawyer, who became Lieutenant-Governor of New York in 2015. Crucially, she was not part of Cuomo’s inner circle and was among those who publicly denounced him last week.

"The AG's investigation has documented repulsive and unlawful behaviour by the Governor towards multiple women," she wrote on Twitter. "I believe these brave women and admire their courage coming forward."

When Cuomo finally announced he would step down, Hochul called it "the right thing to do and in the best interest of New Yorkers".

Hochul’s appointment is a step towards addressing the stark gender imbalance in US politics. While there are 50 states in America, only eight of them currently have female governors. Almost 40% of states have never had a woman at the helm.

Hochul hasn’t announced whether she will run for Governor in 2022, when Cuomo's term was due to expire. However, those familiar with her achievements believe she would be an excellent role model to continue in the role.

Erie County Executive Mark Poloncarz, who worked alongside Hochul when she was Erie County Clerk said: "I know she has the work ethic, determination, and skill set to not only succeed as governor but to take the Empire State to new heights."

We look forward to seeing her fly!

Questions in the 2021 Census have copped a lot of criticism this week and rightly so! The Australian Bureau of Statistics has been accused of not being inclusive enough when it comes to gender, ignoring the LGBTIQ+ community, failing to include a broad range of religions and asking an insensitive question around fertility.

Whilst there are a lot of red flags flying here, let’s look at one question directed at females;

“How many children have you given birth to?”

Not only does this suggest a woman’s role and responsibility is to bear children, but it caused deep distress to women who are struggling to conceive, are unable to have children and who’ve experienced stillbirth or the loss of a child.

Red Nose co-chief executive Jackie Mead said the ABS should have considered how the question might impact some women.

"It was worded so poorly and could be so offensive to so many women, including the many who have lost a baby," she explained.

"Sadly, one in four Australian pregnancies end in miscarriage and one in 135 ends in stillbirth. This is an issue that affects so many women.

"Many women have told us today they are upset and confused about the abrupt way this question was worded and many were left in tears while completing their census."

“The intent of the question is to understand lifetime fertility which is used in the calculation of future population projections for Australia.

“A woman who has experienced a stillbirth may choose to include that in this question; however miscarriages would be excluded from the answer.”

Women also expressed their disappointment about the sexist nature of the question.

“Thanks to census, for two days I’ve been reminded society views me as a woman without children,” one wrote.

Another posted: “I was asked how many babies I’d given birth to on the census so naturally I expected my husband would be asked how many children he’s fathered. Spoiler: he wasn’t.”

Our verdict: it’s a horrible question on all fronts and lacks any emotional intelligence.

Whatsmore, gender and sexuality in Australia has come a long way from “male”, “female” or “non-binary sex” which were the three options presented in the census for a person’s sex.

In a submission to the Senate in 2019, questions around sexuality and gender identity were proposed for inclusion in the 2021 census. They were developed in consultation with LGBTIQ+ communities, but the ABS disappointingly decided against adding them, due to fears about public backlash.

However, as Professor Helen Christensen, Director and Chief Scientist at the Black Dog Institute, notes:  “With LGBTIQ+ people at higher risk of suicidality, failing to gather important data on sexual orientation, gender diversity and variations of sex characteristics is a significant, missed opportunity.”

In short the ABS needs to take a good hard look at the Census and ensure the next one to fall into the hands of the nation in 2025 reflects and captures data of the society that we live in and not the ideas of an outdated system.

Deeply disturbing reports about the hate campaign directed towards South Korean archer An San, who recently won three gold medals at the Tokyo Olympics have emerged leaving us dumbfounded.

While you’d expect her to be hailed as a national hero for her wins, hundreds of complaints were posted on the Korean Archery Association’s online bulletin board after she won her first two medals, demanding they be revoked.

Why? Because the men of this group thought she looked like a feminist. A woman with short hair who attends an all-women’s college. We’re having a hard time processing this statement.

One man’s horrific post read: "It's good she got a gold but her short hair makes her seem like she's a feminist. If she is, I withdraw my support. All feminists should die."

Other anti-feminists claimed that An San used slang supposedly associated with radical feminists used to ridicule men. Her social media accounts were bombarded with abuse, calling for her to refute feminism but ever-resilient and remarkable An rose above the hate campaign against her and claimed yet another medal. Her resilience is something we’re in awe of.

This incident has raised global concerns about the growing anti-feminist movement in South Korea. Among the toxic voices is conservative politician Lee Jun-seok, leader of the opposition People Power Party who has compared feminists to “terrorists” who aim to destroy men vowing to stand with young men against “reverse discrimination”. These disturbing views have gained wide support from men in their 20s and 30s.

Some men feel they are disadvantaged because all South Korean males are required to complete 18 months of military service, which they believe delays them getting ahead. There are also more than a dozen women-only universities in the country, with some offering highly sought-after courses, but there is no male equivalent.

But, it’s not just women who are being targeted. Companies are being bombarded with demands for apologies after running so-called “anti-male” advertising. Convenience store GS 25 was recently accused of using a disparaging finger gesture in a camping ad featuring a sausage. It supposedly mimicked a feminist hand signal belittling penis size.

The gesture, which involves a thumb and index finger pinched close together, was the logo of a defunct radical feminist online community called Megalia.

GS 25 President Cho Yoon-sung issued an apology for the ad causing "pain" to men – and was demoted - which created further furor, with many saying the apology simply legitimized the baseless claims.

Since 2015, a feminist movement in South Korea has been attempting to raise awareness about gender-based violence in the country, the disturbingly lenient punishments for sexual violations, the high female homicide rate, and the large gender pay gap, which is the highest in the OECD.

Despite South Korean women having access to all-female universities – and the outrage surrounding them - they only earn 63% of men's salaries.

Voices of hate and misinformation are louder than those calling for basic human rights. The misinformation in understanding what feminism really is about remains void for anti-feminists in South Korea so much so that appearance and biology now define a person’s morals and societal perspective. This doesn’t make sense. There clearly needs to be a re-education on equality and how feminism acts towards both the freedoms and rights of men and women.

In positive news, the Irish government has finally signed the Gender Pay Gap Information Act 2021 into law, with the mandatory reporting process likely to commence in 2022.

The new legislation will require that eligible employers publish details regarding any gender pay gap in their business.

Any company employing more than 250 people will now have to publish data on the differences between the average and median hourly pay and bonuses of men and women and the percentages of men and women receiving bonuses and benefits in kind.

In the coming years, that requirement will gradually be extended down to any company employing more than 50 people.

According to the latest data from the Central Statistics Office the average gender pay gap in Ireland is 14.4%, which is roughly in line with the rest of Europe but still far from where it should be at 0%.

Whilst the new law is a positive step towards gender equality in the workplace, adding targets in diversity and inclusion as well as pay, together with family-friendly workplace practices and gender career equity policies, will ensure a more holistic approach.

Until next week, stay safe and be kind to yourself,
Team Remarkable