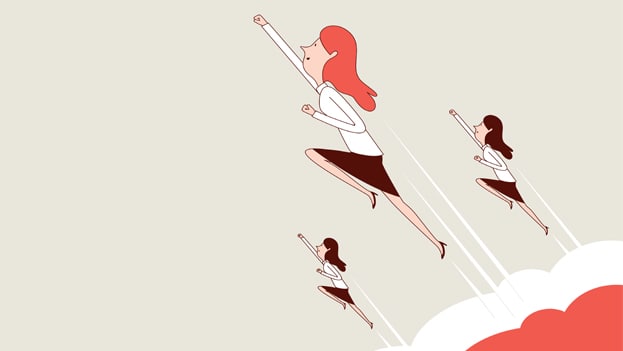 Naomi Osaka has moved the conversation on mental health decades ahead by coming forward with her struggles.

We’re officially in winter and I hope that you’re all rugged up and warm! As a hot tip - my team has introduced me to plush animals that double up as hot water bottles... so if you see me around with these in hand, you’ll know why!

This week, I’d like to talk about mental health and how Naomi Osaka has bravely opened up and taken a stand against the ignorance of mental health in the sporting industry by putting her own mental health first. We’ll also be looking at the argument for menstrual leave, the dismal state of Australian accountants and how four women are taking down Google.

I have long been an admirer of Naomi Osaka, and that admiration only further deepened when Osaka placed her wellbeing and mental health first by taking a stand.

In case you missed it, tennis pro Naomi Osaka was recently fined US$15,000 because she did not attend the post-match news conference after her victory on Sunday. Before the tournament even began, Osaka had said she would not attend media events due to mental health issues and has been transparent about her struggles. And yet, after the fine, she was warned by the officials that missing another event could lead to her suspension from the grand slam tournaments.

And so, only days ago, Osaka announced she would be withdrawing from the French Open tournament, citing it would be the best thing for the tournament. She went into further detail on Twitter, explaining:

“The truth is that I have suffered long bouts of depression since the US Open in 2018 and I have had a really hard time coping with that. Anyone that knows me knows I’m introverted, and anyone that has seen me at the tournaments will notice that I’m often wearing headphones as that helps dull my social anxiety. Though the tennis press has always been kind to me… I am not a natural public speaker and get huge waves of anxiety before I speak to the world’s media… So here in Paris I was already feeling vulnerable and anxious so I thought it was better to exercise self-care and skip the press conferences.”

It’s easy for many people to wave away Osaka’s words and claim she’s being a diva or spoilt. But let’s just make it super clear for the people in the back: Osaka is not a ‘diva’ or ‘spoilt’ for putting her well-being first. With everything we’ve learned about the importance of mental health (especially over the past year), we should acknowledge and respect the fact that Osaka is publicly prioritising her mental health and destigmatising the issue for millions.

According to the British Journal of Sports Medicine, 45% of elite male athletes in team sports experienced anxiety and depression. So it comes as no surprise that other athletes have rallied around Osaka, with the likes of Steph Curry, Dina Asher-Smith, and Venus Williams communicating their support and  championing her message.

Calls and emails to the Grand Slam Tournament officials requesting interviews have mainly gone unanswered. Because, of course, these people get to choose who they speak to and when. They get to decide when they want to show up and when they don’t. Considering the standards they hold their athletes to, the hypocrisy is simply beyond me.

We have sick leave, carer's leave, mental health days, ‘moving days’, but  where’s our menstrual leave? Periods are a fact of life, so why aren’t we raising awareness and changing the ignorant social norms surrounding menstruation and menopause so that all women can succeed in the workplace?

Anyone who has ever had a period knows that for some women there are times when the pain is so debilitating that you can’t get out of bed, much less go into an office. A research team at the University of Sydney recently conducted a workshop on menstrual leave and found that 17 countries have or are considering implementing menstrual health policies. Australia is leading the way with some companies offering days of paid leave and flexible working arrangements when employees experience difficult periods or menopause symptoms - but there are still issues. Associate Professor from the Department of Political Economy, Elizabeth Hill, says:

“Girls are taught from a young age that periods are a private, sometimes shameful issue. But these old attitudes must change if our workplaces are to be productive and inclusive… Despite this progress, we are still failing to address menstruation at the policy level. This affects gender equality and could undermine Australia’s obligations to respect and protect women’s human rights. These policies could help make menstruation and menopause a normal part of workplace life.”

Menstrual leave is a hotly debated topic. Many advocate for it, saying that if we want to create an inclusive environment, it should accommodate all workers’ menstrual and reproductive health needs. However, some argue that it could set back gender equality and reinforce stereotypes that women are weaker or less capable - especially while on our periods. Well, how about menstrual simulations for all men so they can truly understand? Kidding, not kidding.

Male accounting partners are paid 60% more than female partners. That’s according to the latest member remuneration survey from Chartered Accountants Australia and New Zealand. Once we start going into more senior roles, the gap only widens as other factors like shares, equity, and bonuses come into play. And (perhaps unsurprisingly), nearly 70% of women believe a gender pay gap exists, but only 30% of men feel the same way.

Board Chair, John Palermo, has said that the pay gap is a priority, but that progress has been slow.

“It’s disappointing some of the results are still what they are...It is a slow burn, which is really frustrating… you’re trying to instigate cultural change almost one member at a time.”

It’s frustrating for me to read that statement because, despite developing programs and resources to educate senior leaders on the pay gap and how to action change, there still aren’t any mandatory targets or action plans. How can we expect any significant change to happen if we don’t hold those in power accountable? We’ve said it before and we’ll say it again. If you want to take women’s progression seriously, you need to measure it, and you need to reward and penalise for it. Quotas work, because what gets measured, gets done.

The women of Google are suing

Class-action lawsuits are tricky, and despite how much we may hear about them, it’s incredibly rare for these sorts of cases to go ahead. That’s why it’s such a big deal that a San Francisco judge has certified four lead plaintiffs to represent almost 11,000 women in claims that Google pays its male employees more for doing the same job. The case is looking at more than $600 million in damages and alleges that Google violated California’s Equal Pay Act.

Of course, Google tells a different story. In a released statement, they say that it has conducted an analysis to ensure salaries, bonuses, and equity rewards are fair for the past eight years. And that if they do find any differences, they make upward adjustments.

However, according to the plaintiffs, Google pays its female employees $16,794 less per year than “the similarly-situated man”, and women are generally paid “less base salary, smaller bonuses, and less stock than men in the same job code and location.” The company is accused of putting women in lower salary levels than men, giving them lower-paying jobs, promoting them more slowly and less frequently, as well as violating California’s Unfair Competition Law which prevents companies from asking job candidates for their prior salaries as this can perpetuate the issue of underpayment.

If these women succeed, it’ll be a massive blow to Google’s coveted reputation and brand.